“the group most likely to benefit from Wescape, should all aspects materialise, is the lower middle-class”

*Note: the text does not take account of changes to the plan which have happened subsequent to May 2013

Reason 1: Would anyone choose to live in Wescape?

First and probably most important reason is that Wescape aims to deliver up to 25% of its units as subsidy housing, placing 50,000 poor households at an average distance of 25 km, not only from the wider job choice in metro Cape Town, but equally as important, from informal work opportunities, higher order public services and people’s social networks – all critically part of the survival strategies of the poor. If these poor households had choice it is extremely unlikely that they would choose to move to Wescape. If Wescape is approved – choice is removed – this is where much of the subsidy housing will go over the next couple of decades.

The developers claimed they will be able to create 300,000 jobs over 20 years (they have however already shifted their time horizon from 2035 to 2039)– through construction and then related consumption demands. In a comparison, a City of Cape Town study estimated that if the whole metro had an economic growth rate of 6-7% pa, it would create 40,000 jobs annually. Therefore, how could Wescape on its own, and in a much slower growing economy, claim it can create 15,000 jobs per annum ? If not, poor commuter households will again be spending 25-30% of their monthly income on commuting to jobs, as they currently do from Atlantis, Khayelitsha or Mitchells Plain.

Secondly, Wescape developers argue that it is impossible to release land at scale within the urban edge, especially for low-income housing, and hence this form of ‘leapfrog sprawl’ is the only alternative. Internationally, leap-frog sprawl is considered highly negative and well-managed cities do their best to control it.

Watson revealed that Wescape argument on land is the following: A 2010 City of Cape Town study showed that even at current low densities there is enough land within the urban edge to accommodate growth until 2021. At preferable higher densities – even longer. The last census showed that Cape Town is growing more slowly than previously thought – it seems we are now following the Dorrington medium projection, in which case there will be only 556,000 new residents in the entire Cape Town metro between now and 2031. Wescape claims it will attract 800,000 by 2035 (note their projections of Cape Town increase to over 6 million).

Where will all these people come from?  Wescape also adds the housing  backlog and cites 400,000 people, but a more recent and realistic estimate is 277,000 (Province Demand Database). We know it is extremely difficult to release land for development in the metro. But gaining access to land is just one factor out of many which slow public housing delivery – it won’t guarantee delivery.

The third reason Wescape is a bad idea is that if low income households are forced into this remote location, it is very possible that they will find themselves in a poverty trap into the foreseeable future. Attracting market-linked households, at the scale suggested, and hence achieving cross-subsidisation to gap housing, is speculative. Fisantekraal has really battled with this and households affording a R 500,000 to 1 million  product find it very difficult to get credit. Watson questions why households with this choice go to Wescape anyways, when better located and more attractive options exist? Similarly, if the full costs of the development (including bulk infrastructure) are covered by the developer as they suggest, will these costs not be passed on, into what could become really quite expensive housing?

So although the main, driving justification for this project seems to be that it will provide housing for the poor at scale it is the least convincing aspect of the project. Watson points out that the group most likely to benefit from Wescape, should all aspects materialise, is the lower middle-class. Poor households (under R 800/month), as so often happens, could get the worst deal – either directly from having to locate in Wescape if they want a formal house, or indirectly if they don’t –  if City budgets are skewed towards this single development.

Reason 4: Wescape will require entirely new infrastructure due to its satellite nature

Generally cities try and curb leap-frog sprawl because of this very problem: instead of being able to link in to existing infrastructure these new satellite cities require new and dedicated bulks. Wescape developers claim they will pick up these full costs, other than transport – ie not just ‘development charges’ which is a much lower amount. Interesting precedent – but how will this very large cost not be passed on to residents and raise the cost of subsidy and market housing well beyond what it might be in a better location. Business payments into a Community Trust? It is not at all clear why they would do this at the scale required.

The worry of the City officials, of course, is that the new sanitation plant, water and waste bulks will come from their budgets. These very large sums (R 1,5b?) are not in budget plans and would mean withdrawing funds from servicing the rest of very needy Cape Town for the next two decades. Servicing back-logs would continue to pile up in the metro while resources were devoted to this single high risk and speculative development.

Reason 5: Rail link Costs have not been adequately considered

Wescape believes that the public sector should pay for the cost of the new rail links. PRASA has three new rail priorities, each very costly – the Blue Downs link, Fisantekraal and conversion of the Atlantis line to commuter traffic. Blue Downs has several hundred thousand low income people with limited access to public transport – surely this must be the number 1 priority over the possible growth in Wescape of new commuters in the future?

Reason 6: The increasing cost of BRT is not sustainable for low income individuals

Wescape argues that a BRT line will be in place. A service to Atlantis is planned in phase 1 – a largely political decision to help the area (because financially it makes no sense at all where much of the route has no ridership). But BRT is not free – Wescape to city centre trip could be R 8-12 per trip (R 320 per month min for every day use) – from July.

Reason 7: Is there really room in the public budget for a full range of community services?

Quite correctly Wescape developers want to see a new city that is not just housing but also has a full range of community facilities – so there are plans for 400 education facilities including a university, 30 health facilities, 370 public service facilities. Usually constructing such facilities as well as staffing and maintenance costs are carried by government. Almost always the provision of these is well behind need, and new demand within the city taps into existing facilities while waiting for the public sector to catch up. What about at Wescape? It is highly unlikely that this scale of provision is in public budgets in which case people will simply go without (or more likely travel back to Cape Town where services are there, even if overcrowded). What guarantee can Wescape offer that the required level of public services and staffing is present? Will the private sector contributions to the Community Trust materialise at the scale required?

Reason 8: Wescape is in complete contradiction of the Spatial Development Framework

Just a year ago the Cape Town Spatial Development Framework was approved by the City after extensive background research and public consultation processes. It aimed to contain and compact development within an urban edge for a range of reasons you are probably all familiar with. Wescape directly counters this strategy with its location beyond the edge, and its aim to ‘de-densify’ areas within the edge. Seemingly our local politicians have now seen fit to totally disregard their own long and expensive planning process. Yes, the SDF is not sufficiently long-term (many plans now look 30-40 years ahead) and yes at some stage in the future there might have to be a decision to extend development (incrementally) up the West Coast. But to simply overturn a key aspect of the SDF in this way basically leaves the door open to many more challenges of this kind. Cape Town has just said planning is not taken seriously. I think we should all be very worried. 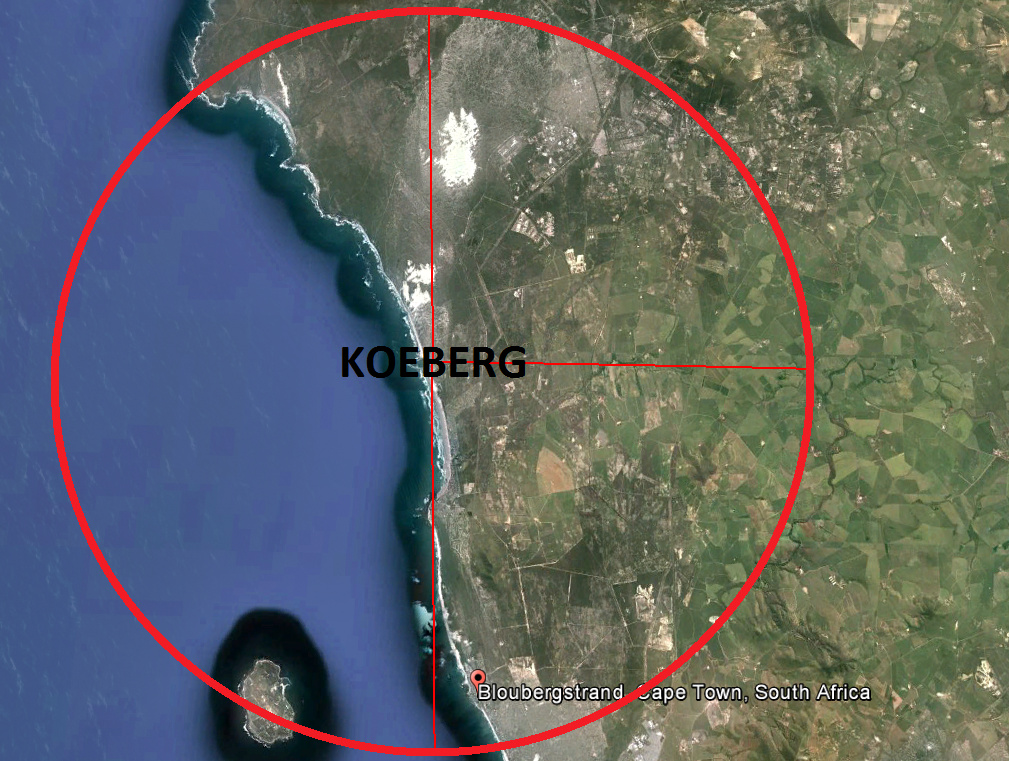 One purpose of the urban edge is to protect agricultural land beyond it. The Wescape site is on land that the developers claim is of low value, but nonetheless there are working farms on that land. Given the long term loss of agricultural land and growing issues of food insecurity we should be doing everything we can to protect productive agricultural land.

Wescape lies within the 16km zone around Koeberg within which development is limited for safety reasons. The National Nuclear Regulator and the City’s Disaster Risk Management Centre strongly object to the proposal. The Regulator states that it is unlikely that this population could be safely evacuated in the event of a nuclear accident. Find out more about Wescape and satellite cities here: